Daveberg is the creeping, eerie terror like the first Alien, and FireHunter is more like a Berserker from Gears of War.. Two very different kinds of fear. I can imagine somebody running into a room to escape FireHunter and the Daveberg just leans down from the shadows and they don't even know he's there until it's too late for them to run. Gives me the heebie-jeebies.

^I love that everyone's picking up on that even when all I have to show you is his rough sketch. He's a slender, conniving monster rather than the tank that your character is - I think it's a nice contrast between the leaders of The Hive.

@Wolf: All of my sketches are done on an iPad with the SketchBook Pro app, but I smooth them out and color them on my computer with Photoshop CS5.

Early on in this project when I wanted to get it anatomically correct, I just sort of drew them while looking at reference images. Then I moved on to looking at different types of Xeno heads, and eventually I just knew the shapes and placements of the things you see. Sometimes I mix and match certain characteristics.

I start out by making the basic shape of the dome. It doesn't have to be perfect, it's just a guideline. If you noticed, the front of the Xeno's head is actually sort of bumpy rather than completely smooth (unless you're looking at the modern designs). You can look at it however you want to, but this small bump (the forehead) combined with the long banana-shaped curve of the rest of the head is shaped exactly like dick and balls.

One of the most defining characteristics of a Xeno's face is its large cheeks because they form that subtle yet incredibly creepy smile it always has. Also notice that the side of its mouth barely has that "ripped flesh" look to it - a lot of people put way too much emphasis in making the sides of its mouth all messed up. And it's fine, it's a good look, but I prefer the more human-looking mouth, which seems to have been retconned in newer material (the blu-ray discs of Alien and Aliens show the original Xenos with the ripped flesh mouths rather than the subtle smiles).

I've always tried to draw the lower jaw as if the skin was transparent and you could see the actual muscles and tendons involved in moving it, never thought of it as "ripped flesh".

Edit: Nevermind, it still looks like ripped flesh. I like how its mouth looks more monstrous there, but again, I've always liked the creepy little amile a little more.

@Wolf: Yeah, I've never once bothered to get the entire body 100% correct. I know where most of the definining characteristics are, but usually I just mix and match from every Xeno design I've practiced drawing.

I know right bloo and sorry for calling you a dork dorks to me are cool in my way. And i usually just don't bother coloring my drawings i just draw it and do it on microsoft paint i shade it to make it like it's in a shadow and for my xenos they are a little cartoony but i manage to get the head.

The next two weeks are gonna be hell. No new stuff till the first week of May. Sorry, guys.

@Wolf: What? You called me a DORK?

Why the FUCK would you ever think that's okay? Do you kiss your mother with those lips? Would you kiss YOURSELF with those lips? My grandmother was a dork, and she spent her ENTIRE GODDAMN LIFE in pain because of people like you who throw the word around like it's NOTHING. GodDAMN it, I'm tearing up. Do you see what you've done? I'd call YOU a dork but I'm a decent person and I wouldn't utter such slander in front of ANY decent community of folks, much less an esteemed group of well established citizens who PRIDE themselves on being above such revolting slurs of the tongue.

Do you want to know the worst part of my grandma's life? Do you?

Dude, I was joking. You seriously have nothing to worry about. We're all cool dudes up in this crib, do you concur with what I'm sayin', dawg?

Think you can sneak off without giving us so much as an update?

I've actually been in finals mode the entire month, and this is the actual finals week, so I've been way too busy. But I DO have some updates.

First, what I HAVE been doing is actually studying human poses and expressions, which also help with Predators. I've been sketching different muscle builds, face types, etc. almost every day to help me find how I want to draw humans for this, and it's been great practice. I've deleted a lot of it because it was mostly scraps. After I got comfortable with drawing human faces (mostly women since that gave me the most trouble), I started messing around with different painting styles. One of the results of those experiments is what you see in the Magenta drawing in PoN, though that won't be the way I color the rest of the designs, which will look similar to the way I've already been doing them.

No real designs, though. I'll definitely be getting to those within at least a week.

Second, I'm completely comfortable with drawing Xenos and have been for a while, since those are my favorite thing to draw. Getting those complete won't take any effort at all. Predators are harder for me, and humans are in between.

I guess I could upload one or two of the best human sketches I've done so far just to show you that I've been making progress, but those are all at home and I won't be there for another... 6-9 hours.

Whoops, I forgot about my promise. 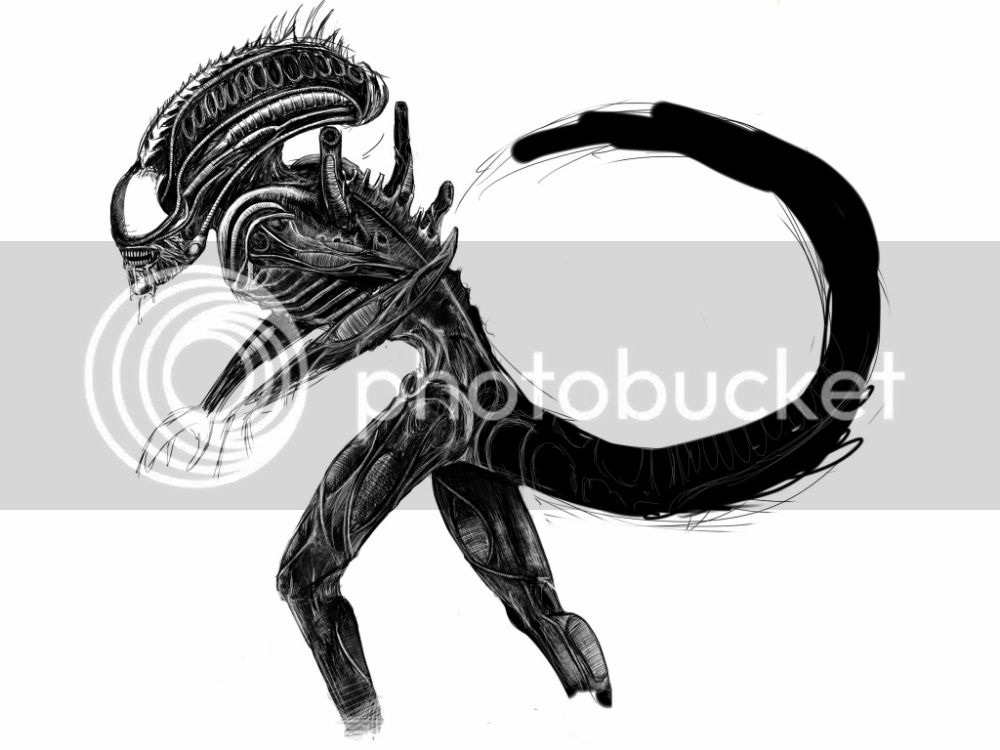 Yes, the guy is Jim.

Very nice, but is the Xeno based off of a character on here or just a generic one?

He's definitely based on a character here, but he's also the base for generic Xenos (minus the enlarged head spikes). All the other designs (excluding Jim and the blonde girl) were all just random sketches for practice.

I finally have time to start working on these regularly again. Here are a few human sketches of Jim and the blonde girl again:

Hey bloo is a pain in the butt after drawing with hands cramping?

I honestly never have those problems unless I've been handwriting for hours (which in this case I have been because of finals, so I slightly felt the pain while drawing but it honestly doesn't bother me) or I haven't been stretching after practicing music.

That's amazing bloo what instrument do you play?