Yautja Costume I am making.

So I have decided to try and make a predator costume of my own that looks legit. But I am in the very early stages of planning and want to include you guys in the process since you guys are my Alien/Predator buds and think up some pretty cool stuff.

Thing number one: What type of Yautja do I want to make? 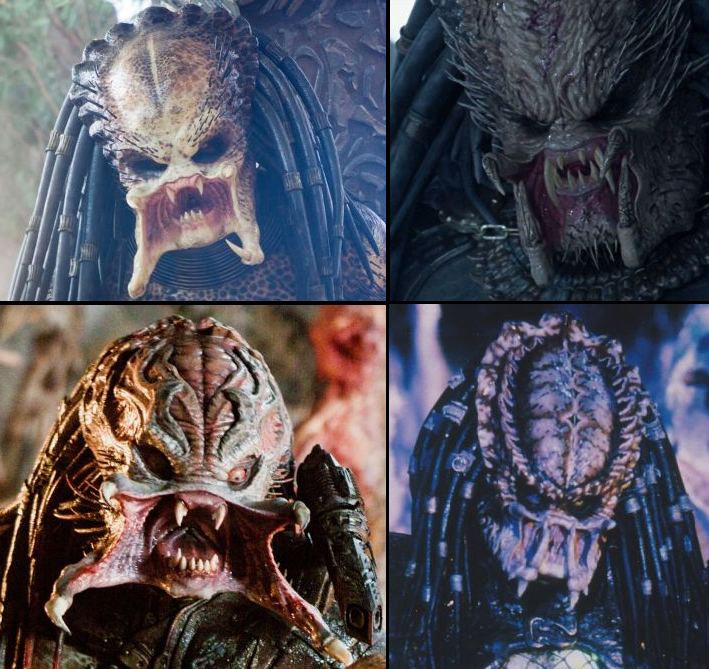 Do I want to make a classic, an elder, a lost tribe or a Berserker? Whatever I choose to make probably will have a non-standard skin patterning compared to what we've seen of them. Like reds or blues or something maybe. I am starting out by making the head of the Yautja without a mask, because that will come later.

I think it'd be really cool to see the Predator 2 Elder, actually. If I remember right, he has the same face and mask as the normal Predator anyway (since his costume was literally made from the original costume).

Edit: Though, I guess you picked these four since you probably have the figures (which you can use as references), so the Berserker would be cool too.

I actually just found the image in a google search and went with it since it showed basically all variants seen in the films that had exposed faces. I do have the original predator action figure from Neca, but I haven't been able to get a hold of any more since they are somewhat expensive.

Personally i would say go for the classic look with the mouth shut,

^JESUS. For a second I thought I was looking at a thread from the Stone Age, but then I realized I was just looking at a ghost...

@SR: Shit, that sucks. In that case, probably just go with what BH said.

I vote for the lost tribe one.

wasn't bug hunt gone for a while? looked into some old threads.

I think Bug-Hunt was here when I first joined but slowly faded into legend. Cool to see him around though.

Bughunt was gone for about eight years. Jesus.

Okie dokie, update on this project. I have decided to make both a Classic Predator and a Super Predator, but to make everyone happy the classic predator will have an exotic pattern to make it also like the a lost tribe predator. Also the mandibles will move when the lower jaw does, so when I roar the mandibles will spread out like in the movies.

Currently I have all my materials gathered and will make a tutorial for you guys once I have completed one and know what all I am doing.

Edit: Also both costumes are original characters, so they aren't supposed to be the Jungle Hunter or Mr. Black or anything.

What the fuck, Bughunt?


Anywho, I have an update on this project. I have come to somewhat of a serious problem, which is I need to use a material that is basically like wood just not as heavy but I don't know what material I could use. Also I don't know how to properly use power tools because no one ever taught me how. This is because being the youngest child I got skipped on a lot of stuff because my parents thought they already showed me how when they had actually shown one of my older siblings how to do whatever it was that I now have no idea how to do. I also don't know a lot of sayings due to this.

So I am using a bike helmet for my base for the head, a kid sized one so it fits snugly on my noggin but isn't too big in comparison to my body(Yautja do have big heads but not ridiculously huge heads). I plan on making a two-piece face plate that attaches to the bicycle helmet by means of the upper half of the face plate that will represent the face of the Super Predator(I am making that one to start so I can work out all the kinks for the basic setup).

So I am hung up on the mask aspect of this project for the time being but will try to resume it as soon as possible and will be working on the non-head aspects while I try to get the head stuff worked out, such as armor, feet, weapons and so on.

Well, if he can put someone in charge of the DBO and update the rules, then yeah.

Well skull ripper whats the update on the costume?

Basically, I've come to the conclusion I need to expand my skills in costuming before I can make Predator costume worth two shits. I have a lot of the materials I need, I'm just kind of in the experimenting stages with things like the moving mandibles and armor construction.

I'm pretty close to just saying screw it for the time being and make non-moving mandibles and continue on with it, but other things like making the exposed torso skin are beyond my skill(it involves a lot of liquid latex and airbrushing paint on, both of which I have never done before.)

So I would say it is tentatively in the works still.